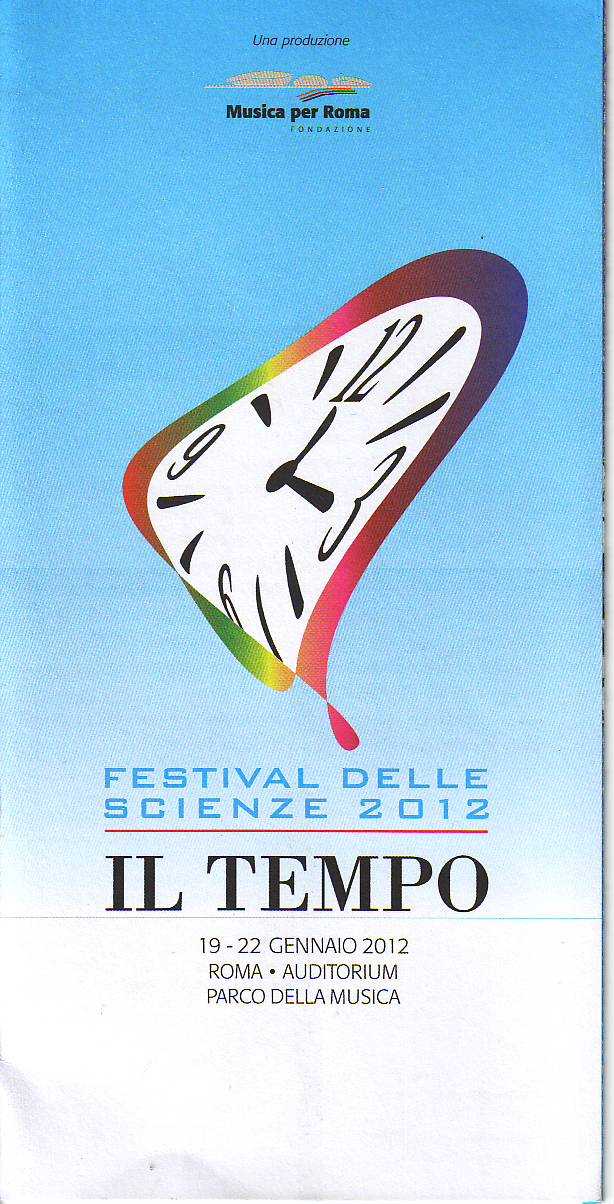 (BACK TO THE ITALIAN VERSION)

This matter draws my attention for some time. In 2004 I reported on these on-line pages some considerations under the title “La vita è una trottola”, thoughts developed after reading Margherita Hack’s book “Dove nascono le stelle”; I concluded with some deductions about the behaviour of what we call “time” to the extreme limits of the function “speed”: the maximum one (in which the time is zero, quiet) and the minimum one (a null time corresponds with a null speed). “In the middle there is our reality, or perhaps it is better to claim that there are our illusions, because who does tell us that our reality is just represented by the extremes, namely of a static universe, a universe without time?”, I wrote opening Barbour’s book.
Beh, it has been surprising to recover the book that I had tried to study seven years ago, to look again at the notes that I had taken and to listen to the author proposing the essential concepts in the conference introduced by Giorello. Barbour started with a remark: “I am in the eternal town to speak about time that does not exist.” Then, he analysed the history of scientific thinking about the question of time, until his intuition of the non-existence of time and his consequent attempt to provide a mathematical description of the timeless reality. You can imagine how I feel myself near to this matter, after the meeting with Davide Fiscaletti e Amrit Sorli, after studying their theory on the timeless universe and – above all – after writing with them the novel “Oltre la Fenditura“.
In his introduction, Giorello made an interesting analogy, which helps us to realize the sense of the illusion of reality: he has talked about the lights which decorate streets and places during the town’s exhibitions, or in the Christmas days. Those in motion, in which one can see a flash of light that runs along a wall. Each lamp of the path lights up at the right instant, then it goes out. Each emits its light, but the observer has the impression to see only one light, with its own entity, that moves.
When, later the example of the cat that springs up to grasp a mouse has been recalled, explaining that in Barbour’s view the cat which is springing up is not the same that fells on the mouse, immediately Giorello’s analogy has returned to my mind. It is hard to realize the idea that I who have moved am not the same that I was before moving. The universe divided in closet temporal instants, the Barbour’s Nows and the concept of infinite parallel universes which are strictly linked, among them indeed the motion of everything exists takes place, are harsh and little intuitive. The instinct is to reject them in toto, and to take Barbour’s treatment as a curious intellectual exercise which is end to itself.
However, this intuition does not seems to me far from Fiscaletti’s and Sorli’s view, which foresees a quantum and wave universe (quanta of space that are vibrating and with their peculiar vibrations generate the material entities), but above all timeless (the time intended as a reference system to measure material change, that is irreversible; change occurs through variations of the vibratory state of the quanta of space and the motion is the transfer of the information of the vibratory state among different quanta of space; so, the quanta of space would be the lamps of Giorello’s allegory and everything exists, we included, the light that walks on the wall). And then it is conscious.
Yet, consciousness. Giorello had just asked Barbour how our sense of permanence, our personal identity included, can be combined with the absence of time and motion: is it an illusion? After his affirmative answer, I asked him if he considered also consciousness an illusion or if he would wish one day to find a satisfactory mathematical description of consciousness. I was encouraged by his answer: he certainly does not believe that consciousness is an illusion. Consciousness is real, but remains a mystery and Barbour indeed hopes that someone can manage to explain it.
Therefore, there are many themes about which one could put around a table Barbour, Fiscaletti and Sorli (for instance with Giorello as a moderator; I would limit myself to take notes): the timelessness, the hypothesis of the equivalence between Barbour’s “Nows” and Fiscaletti’s and Sorli’s “Quanta of space” and the theme of consciousness, which seems mysterious for all us ath this time, but that Fiscaletti and Sorli read as one of the properties of the universe itself.
I had also other questions for the English physicist, but the context, because of obvious reasons, did not allow it to me. For example, I would have asked him about the antropic principle. I hope that there will be chances in this sense, for instance we can go find him in his farm-house, to talk between a snip of tea and a perfumed muffin.